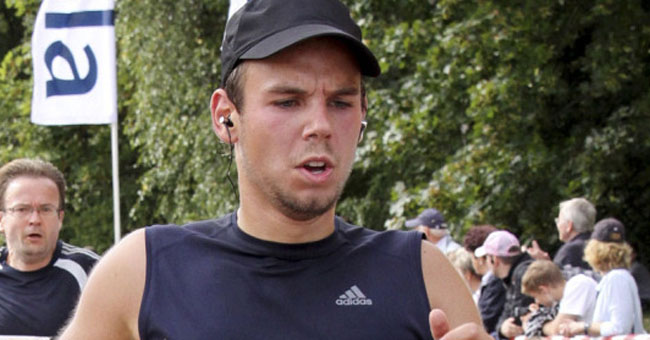 In this Sunday, Sept. 13, 2009 photo Andreas Lubitz competes at the Airportrun in Hamburg, northern Germany. Germanwings co-pilot Andreas Lubitz appears to have hidden evidence of an illness from his employers, including having been excused by a doctor from work the day he crashed a passenger plane into a mountain, prosecutors said Friday, March 27, 2015. The evidence came from the search of Lubitz’s homes in two German cities for an explanation of why he crashed the Airbus A320 into the French Alps, killing all 150 people on board. (AP Photo/Michael Mueller)

About a week ago, the world watched, horrified, when news broke that Germanwings co-pilot Andreas Lubitz deliberately flew his 149 passengers and fellow staff to their deaths in the French Alps.

As news of his life began to filter through, we were introduced to a young man (only 27) who had suffered bouts of depression to the point of seeking help and medication. He was able to hide this from his employer and even before he received his pilot’s license. As he continued to work as a pilot, his psychiatrist wrote “unable to work” notes for his employers that Lubitz simply crumpled and threw away.

Other stories showed a trail of Lubitz seeking medical help for his eyesight, which had begun to fail. Having had a lifelong dream to fly as a pilot, this might have been the factor that pushed him over the edge.

Sadly, when depression leads to suicide, it never takes so many lives with it. Lubitz might have been committing suicide of his own initiative, but he murdered 149 other people in the process.

Interestingly, there have been other pilots suspected of suicidal flights. Those incidents never occurred in aviation history with a pilot accommodating passengers until 1994 when a Moroccan pilot steered his 43 unsuspecting passengers to their deaths (and his) in the Atlas mountains. Since that incident, at least five “pilot suicides” have occurred, and many suspect that the disappearance of the Malaysia Airlines flight last year was cause for the same.

When other people’s lives are at stake – hundreds, even – we as psychiatrists (and even clergymen) who might hear or suspect danger ahead approach a very thin line. Do we break medical ethic and go above our patient’s head to alert police or employers? Obviously, in the case of Lubitz, his psychiatrist saw the signs and even wrote stays from work in his behalf, but nothing was ever seen or heard of these notes because Lubitz feared losing his job.

Friends and family members may feel torn on what to do, too. You certainly don’t want to create trust issues in your relationship with a person you suspect may be suicidal or sliding down the slippery slope to this sort of thinking, but his or her safety, livelihood and – perhaps – the safety and livelihood of others, is definitely at stake.

For starters, here are common signs to recognizing that a person is suicidal:

Ask the person directly about his or her feelings and listen with all seriousness. If you feel this person is at a high risk point, don’t try to handle the situation without help — for starters, try not to leave this person alone. And, get help from a trained professional as quickly as possible – you van even call me! (949) 481-0118.