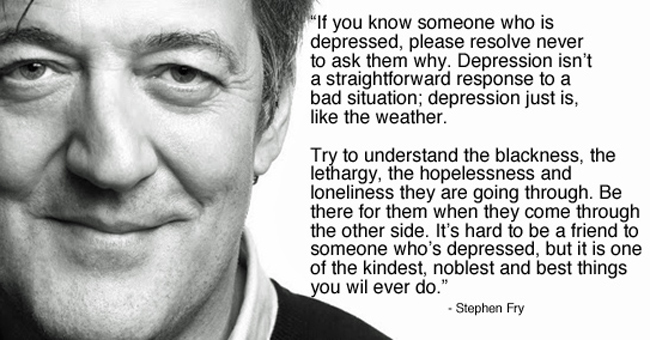 Depression is a subject few people care to discuss. Many people have an aversion to depression because they equate it with defeatism, a weak self-image, lack of will power and the sissy’s response to life’s challenges. Still others fear that it can invade at any moment and then stubbornly refuse to leave.

My discomfort with the word “depression” is not only the negative idea it creates in our thinking, but because people attach so many different meanings to the word and have so many wrong assumptions about how it should be handled.

There’s an assumption out there that to relieve depression, we can simply chemically boost the levels of serotonin and dopamine in one’s brain. People assume that there’s an inadequate supply of the right chemicals and think that medication is in order to increase the production of these good-feeling chemicals. Some of the early attempts to medicate depression were based on the same assumption.

Since those early days, however, research in the field of neuroscience has uncovered the fact that the brain of a normal, healthy person has no problem producing serotonin, dopamine and so on. The problem is that, even though these chemicals are already present in the brain, and that a person has the right amount, the chemicals are not doing their job. For some reason, they’re not moving from one neuron to the other as they should. In other words, the problem is not due to a chemical deficit but a chemical imbalance.

The medications I use to balance neurochemicals (and, thus, relieve depression) do not ADD active chemicals but stimulate the brain to put to good use the chemicals that are already present.

These medications do not necessarily make people feel instantly happier. They are, instead, capable of leading to true underlying, natural happiness.

… How’s THAT for handling the “D” word in your life or the life of someone close to you?!

Learn more about this as I discuss this at greater length in my Late Night Health Feb. 14th radio show with host Mark Alyn. Feel free to also contact me with questions, or sign up to make an appointment. Let’s work together on eradicating the “D word” from your life.