The Narcissist: It’s All About Me 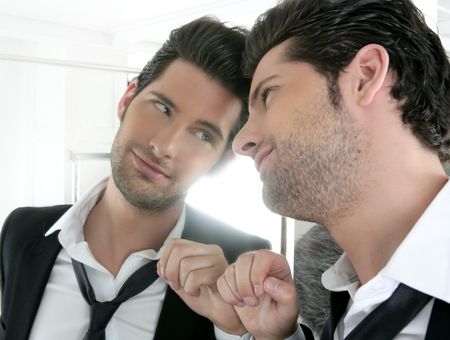 Last month, I introduced you to the Histrionic Personality Disorder.

This month, it’s all about the Narcissistic.

You probably thought your friend’s complaint about a narcissistic boyfriend or girlfriend was just a trendy word of the day. But, as it turns out Narcissism is clinically proven, serious issue … usually moreso for the people around a narcissist than the actual person in question him or herself.

Unlike histrionics, narcissists tend to be male and make up about 1% of the population. At first glance, a narcissist embodies qualities that seem quite admirable – self-assurance, self-confidence and absolutely no lack of self-esteem. Indeed, “self,” is the center and circumference of the narcissist’s world. The narcissist believes too much in his own importance and not enough in the importance of others. The value he sees in himself is extremely exaggerated while the value he sees in others is practically nonexistent.

As far as the narcissist is concerned, rules do not apply to him. He can see no reason why he would have to wait in line, pay full price, or observe the speed limit like everyone else. The narcissist can become frustrated when he discovers that someone else has more money or objects than he enjoys. (In many cases, you will find that a narcissist comes from a family of near-poverty of financial stress and has clambered – without heed – up the socio-economic ladder to prove his unarguable worth.)

Telling signs of a narcissist:

•  Whether in business meetings or social events, the narcissist expects people to listen to him and respect his opinion.
•  If he is challenged, he normally gets angry, dismisses his critic or walks away as if he needs not waste time with inferiors.
•  He is not a good listener and will often act distracted when someone is talking to him or in a circle that includes him.
•  If placed in a position of power, the narcissist is more likely to rule than lead, and inclined to be abusive and have no filter.
•  Narcissists are often cruel with lack of insight, impulse control and empathy.
• Narcissist are quick to blame others and do not own up to the fact that their behaviors and decisions are a big part of the problem.
Over-sensitive to failure, the narcissist is resistant to self-assessment and self-criticism.

Do not expect to reach a win-win with a narcissist because his entire world is constructed out of win-lose outcomes. He will exploit opportunities at every turn, regardless of the stress or loss this causes other people. The anguish of others means nothing to him – he never loses sleep over it, even he is is clearly the cause.

As odd as it may seem, narcissism is a facade constructed over an abysmal sense of inadequacy. The narcissist’s pretense serves as a mask to cover his self-doubts and low self-esteem. He will, in fact, blame everyone else for anything that goes wrong, and never entertain the thought of owning the responsibility himself. It is rare for a narcissist to be able to see how he has contributed to a crisis at work, in his marriage or with his children.